Everything was conspiring against our trip. It looked like the cold weather would never clear, a transporter moving a mobile home was stuck in the access road to the caravan storage park and we spent 3 hours in a car park on the M25.

Our luck turned we found a pub called the Drum Inn who have a caravan park at the rear for £17 within a few miles of the tunnel. Franc then talked antiques with a man on the same wavelength working for Eurotunnel. He kindly put on a train 2 hours earlier.

Trying to stop as close as possible for the night to a ‘Marche de Puce’ in Houdain, we circuited the area several times looking for a suitable Aire. Franc was a bit twitchy about the recommendation on the app for motorhome stopovers – a military cemetery! It claimed to be very quiet – maybe not. Eventually, the kind owner of a trout fishery and restaurant in Rebreuve-Ranchicourt, Domaine du Pont Prieur, let us stay the night.

The flea market in Houdain was a table top sale in a sports centre. There were some great finds including a beaded baton made by Turkish Prisoners of War in world war one and a bronze ashtray commemorating the armistice in 1918.

The Aire in Beauvais, our next stopover, overlooked the city. It was free to stay the night, but the water supply had been cut off. We had heavy rain and the prospect of no vide-greniers (car boot sales) the next day was looming.

The first vide-grenier in Beauvais was on but disappointing, being mainly clothing and modern items. We came away with just a little glassware.

The second planned stop was Chateau Thierry vide-grenier. We passed through further rain getting there but fortunately, it was still on. Franc followed the sat nav religiously and the Battlestar, our trusted motorhome, almost came stuck in a narrow street barriered off for the sale. I had to do some international diplomacy to persuade cars in the queue to reverse up. No doubt there were some mutterings about ‘The English’.

Some homes had opened up their yards, where you could wander in and negotiate purchases. We found a stall where the elderly seller responded ‘un Euro’ to every enquiry about the price. In such cases, you tend to stay put. We bought an antique cast iron fireside candle stand, medieval in look, but probably 19th century for ‘un Euro’. Even better is when you have a ‘cinquante centimes’ response to your enquiry – with the current exchange rate that is 40p.

We search for certain items which sell readily, one of these is vintage enamelware. Wear doesn’t really matter – it just needs to look old. Last year we successfully bought and sold enema delivery mechanisms as planters. Time will tell whether the bedpans, bought for 1 and 2 Euros respectively, will have the same success!

We came upon our success of the day by accident. Not all vide-greniers are listed on the official websites but come up on Google separately. Viel-Maison vide-grenier was such an example. Cars parked on the roadsides from all points of the compass, stalls set up everywhere and there were yards, garages and houses to be explored. We could have filled the Battlestar several times over if we had stopped at every opportunity.

There are times when you have a déjà vu moment. The French are so trusting that they leave their stalls for lunch – nothing but nothing is as important to them as a 2-hour lunch break. I had spotted some very old lace and we went with the flow and sat with sausage and chips waiting for the stall holder to return. The lace was contained in 1930s chocolate boxes made of a swirly green Bakelite. I persuaded the stall holder to sell these to me. It was not until later that I recalled that my Nan had used one of these chocolate boxes as a sewing box. I think this is why I had to have them and probably paid too much.

Note to self – we must buy jetons (tokens) for water in advance and not allow our water supply to become too low.  Rural shops and petrol stations where the jetons are sold are closed on a Sunday. It was fortunate that our free Aire in Le Gault-la-Foret had a free water supply or we would have been washing in bottled water!

Gourmet eating in France can be achieved on any budget and with limited facilities and ingredients. Fruit and vegetables are always of a high standard – the French would tolerate nothing less. Starters of escargots for 2 Euros from Lidl, duck breast with a Foie Gras sauce (Carrefour) and Duchesse potatoes (also from Lidl) followed by Munster cheese with a nut bread – total cost of 15 Euros. Delicious.

Some of the best brocantes are not picked up by a Google search but by keeping your eyes open. Montmirail Brocante was one such opportunity. We had spotted the yard on Sunday when it was closed. The owner, Francoise, did house clearance and his presence at the store was uncertain, but we were lucky. There are very few charity shops in France and clearance particularly in the remote rural areas is good business. Making room for new stock is critical and consequently, prices are keen (cheap). It became clear that Francoise did not value bed linen. We foraged deep beneath the sheets and found a 1930s rose pink silk quilt and 1920s silk ruffled cushions.

Google will show you to the 5-star expensive antique shops unless you are close to your target. It is worth repeating the search at every medium-sized town. Brocante and Occasion run by Pascale in Neufchateau was found by this method and was extremely good value for money. Pascale seemed almost embarrassed for charging us 30 Euros for a Degues Art Deco pendant shade. When we later looked up the maker on eBay we realised we had the bargain of the day. 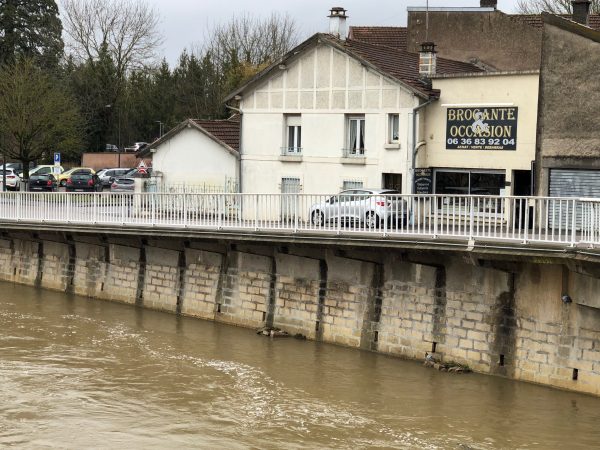 It is always worth using local information to find the best restaurants. Pascale described the Hotel le Rialto as ‘medium but simple’ and so it was, but the stroganoff sauce would have graced the finest table. The meal was 24 Euros including drinks and coffees.

Some places are not for us and we have learned to say no the hard way – the heart must not rule the head however beautiful the object. However, brocantes run by collectors are a different matter and it really depends on the item selected.

Brocante Jose Dufour at Damas et Bettegny was such an example. No-one was about, but there a message that he was close by if we rang. My pigeon French was successful and he emerged from around the corner. We did negotiate a fair price on some 1960s and 1970s lamps and on a collection of hats. I don’t think he wanted to sell his more unusual stock, hence the prices.

As we prepared to leave we were invited into the inner sanctum (the shed in the garden as per American Pickers).

He had an amphibious vehicle, a collection of about 500 cycles and a pink Citroen 2CV hanging from the roof. Franc wanted the micro Jeep but sadly it would not fit in the Battlestar. 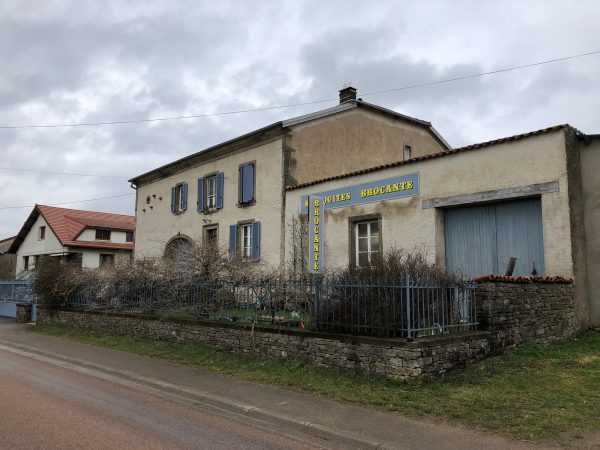 Our stopover was at a marina on the River Moselle in Epinal. At 9.60 Euros including electricity, it was very good value. Apparently it does get busy in the Summer, but the French do not venture out before April.

We returned to the village of Bussang in the Vosges near the Ballon d’Alsace for the first time in 10 years. The hotel was closed and for sale but the epicerie (grocery shop) was still open. We found our old favourites, myrtille tart which turns your mouth purple, fromage avec horties (cheese with nettles) and Cremant des Vosges, a superb sparkling wine.

Trocantes or ‘trocs’ have evolved from pawn shops. They are enormous warehouses full of second-hand goods. The first one in Epinal had mainly modern goods but we did find some antique drugs bottles, copper pans and decanter sets.

The Troc north of Nancy was much more exciting. We had to restrict ourselves because we were already sleeping with our finds.  You could buy a 12-foot Asterix for 799 Euros or a 1950s sweet dispenser for 69 Euros. We settled for those things the French don’t value but are unusual and expensive at home – knife rests and Art Deco lamps.

We struggled to find our overnight stop in or near Nancy. The first Aire had been padlocked and the second had vandalised services and was quite intimidating. Finally we found a place at Millery, at the side of the Moselle. It was quite busy for March, probably because others had encountered the same problems.