With so much bad weather behind us, the warmth of the Dordogne beckoned. France is a place with habits and rhythms and you can use this to your advantage in the pursuit of great tat. Sunday is the day for the vide-greniers (car boot sales), however, we were looking for something on a Tuesday. Fortunately for us, Tuesday 1st May was Labour Day in France, which is a national holiday, and also a day of numerous vide-greniers.

Originally we planned for a stop near to Le Mans, but driving was tiring and so we stopped at Ferte-Bernard, near the lake at a free Aire. We had seen the signs for a brocante on the outskirts of the town and thought we would have to walk about a mile to reach it. We were wrong. There was such a kerfuffle at 6am all the motor homers were shocked to discover a car boot on the doorstep. Perfect for us, but not for our neighbours who left in a convoy to stop being blocked in.

The French car booters are called exposants and there were allegedly 300 of them. There certainly were many and I did my 10,000 steps doing several circuits.

Message to self – must sort out Euros from £1 coins to avoid an international incident.

Pipes and hats were the most successful purchases of the last French trip. They all sold very quickly and I was seeking out more. 7 pipes and one stand for 20 Euros was a great purchase. I love to learn new subjects and you would be amazed at how much there is to know about pipes. There are strange materials such as meerschaum or sepiolite, which are used to make pipes and an infinite variety of shapes such as billiard and churchwarden. These are ‘Mantiques’ and the cost of the average one is significantly more than the ‘Womantique’!

There were very few local businesses benefitting from the national holiday. Several restaurants had signs up saying they were closed for a fortnight. We eventually found a lone Brasserie for an evening meal. I chose unwisely. Google translate said an andouillette was a sausage, an oversimplification – it looks like a sausage and smells like a sausage but when you cut into it you discover it is a tripe sausage! Franc ate it and thought it was ok!

After several tours of Richelieu, we could not find the brocante we had visited a few years before. Nevertheless, the walled city is lovely and I achieved my pedometer target for the day in one hit. The Tourist Information Centre directed us to Eric Barbotin’s brocante in Marcilly-sur-Seine. We came across a collection of signed posters for Pierre-Laurent Brenot, a pin-up artist who was active in the French fashion and the advertising world in the 1960s. Items like this are quite tricky. It is sometimes easier if there are items online to compare but if there is very little, just Wikipedia and a few images, their value is hard to predict. Sometimes you have to just go for it and hope someone appreciates your finds too. 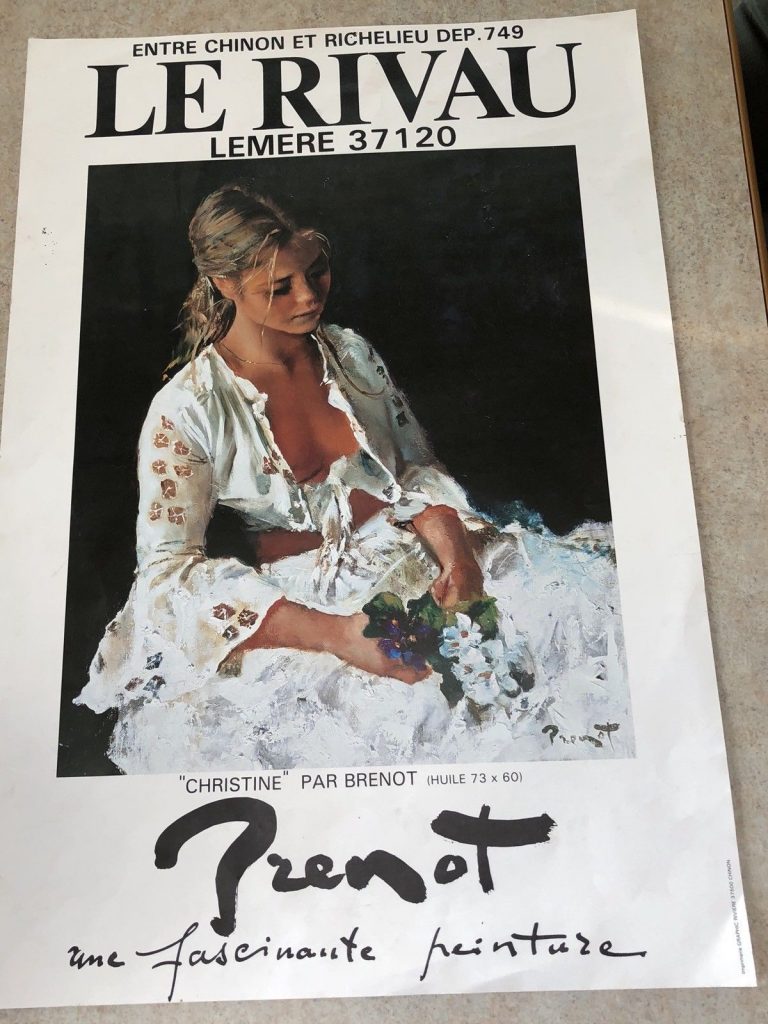 France has consignment shops where second-hand goods are bought, pawned and sold. True vintage takes some finding and you spend time rather than money searching for treasures. It was 12.01pm when we arrived at La Caverne on the outskirts of Angouleme and the doors closed. As with all but a few French shops they would be closed for at least 2 hours. What to do?

Opposite La Caverne was a restaurant called L’Arrivee. We went with the flow and had lunch. The best value restaurants are where working people eat and this was a good example. There is a set basic menu but we came out with change from 20 Euros for two 3-course lunches so we were pleased with our meal.

The plan is we have no plan and what we have we change quickly. I had vague memories of a beautiful place called Brantome from some years before and we came upon it again by accident. Since our last visit, a superb camping car Aire had been developed close to the centre. There were signs for ‘Antiques and Brocante’ but they were either closed or non-existent.

We were drawn to a restaurant with a sense of déjà vu, the Moulin L’Abbeye. Some years before we had balked at the prices but since then have made a point of treating ourselves to a gourmet meal on occasion. This one is a one-star Michelin restaurant and in addition to the food that you order there are canapés, bread to die for, palate cleansers and petit fours that have to be taken home in a box.

The Dordogne is full of –acs. Virtually all the village and towns end with -ac, Souillac, Bergerac, Beynac to name but a few. Our next stop was by the fast flowing River L’Aubezere at Cubjac. French villages are so quiet there is never anyone wandering about. You just hear the sound of the river as it rushes over the weir and the swifts screaming overhead.

Just 3 miles from our overnight stop was Bouchard’s `Fete du pain’, a bread festival. A vide-grenier accompanied this feast. We were early birds arriving at 6.30am, before the official opening and before breakfast. It was a small affair in a tiny village but we had some unusual finds. Some old magazines from the 1920s caught my eye: `Le Petit Echo de la Mode’, a women’s fashion journal. We also purchased what we believe to be a walnut press. Walnut oil is a local delicacy hereabouts and it takes a lot of walnuts to make a little oil so you need a really strong press. 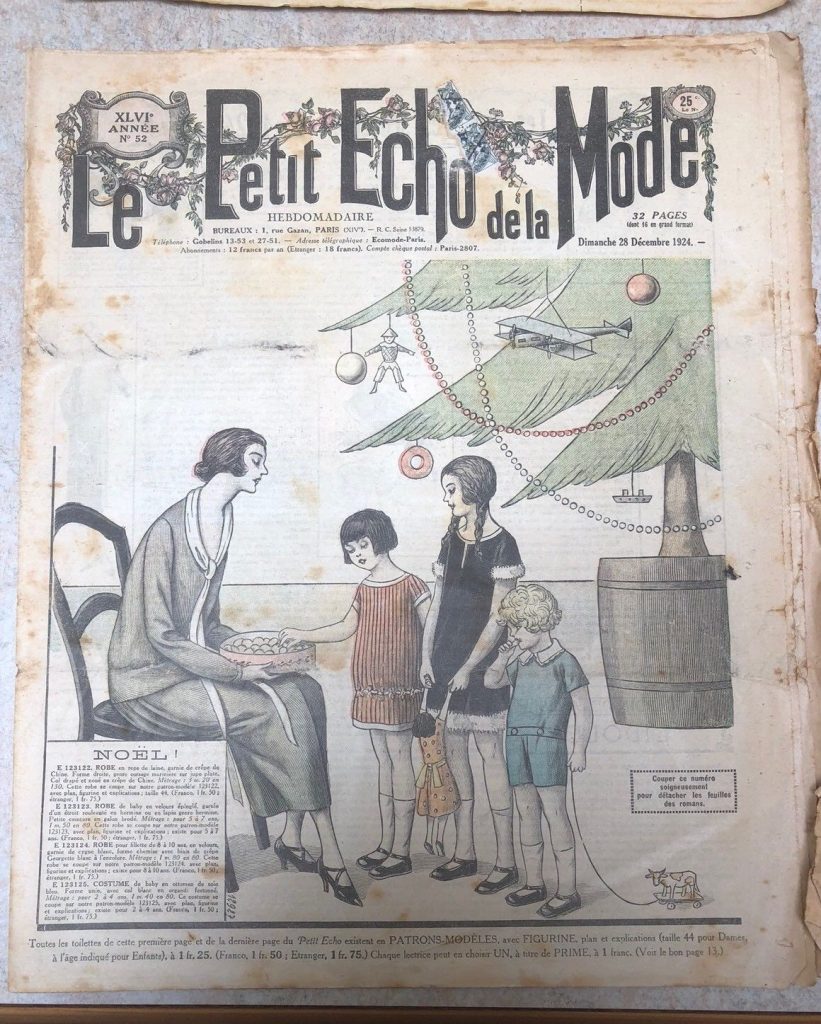 Souillac is our stop for the night at a free Aire just inside the town. I thought Souillac was suffering with many vacant shops. My memory of it from 30 years ago was a thriving vibrant place. The beauty of France out of season is the quiet, but sometimes it is eerily so. You are lone wanderers amongst closed and vacant shops, shuttered windows and locked doors.

Just a couple of miles from Soulliac was the tiny village of Peyrillac et Millac which hosted a Sunday vide-grenier. Nestled between Chateaux along the Dordogne, this offered a wide variety of treasures. If you are offered a treasure at a price that cannot be refused, stick with the stall and see if a multi-buy deal can be done.

Sometimes bits of history turn up in the strangest places. One stallholder had some French magazines from 1933. One had a picture of Ramsay Macdonald, a British Prime minister from the 1930s on the front cover. He was speaking to a world conference in Rome. A line drawing of an economic agreement being signed by Italy, Germany, France and Great Britain was inside. It is ironic that 6 years later these countries would be at war. 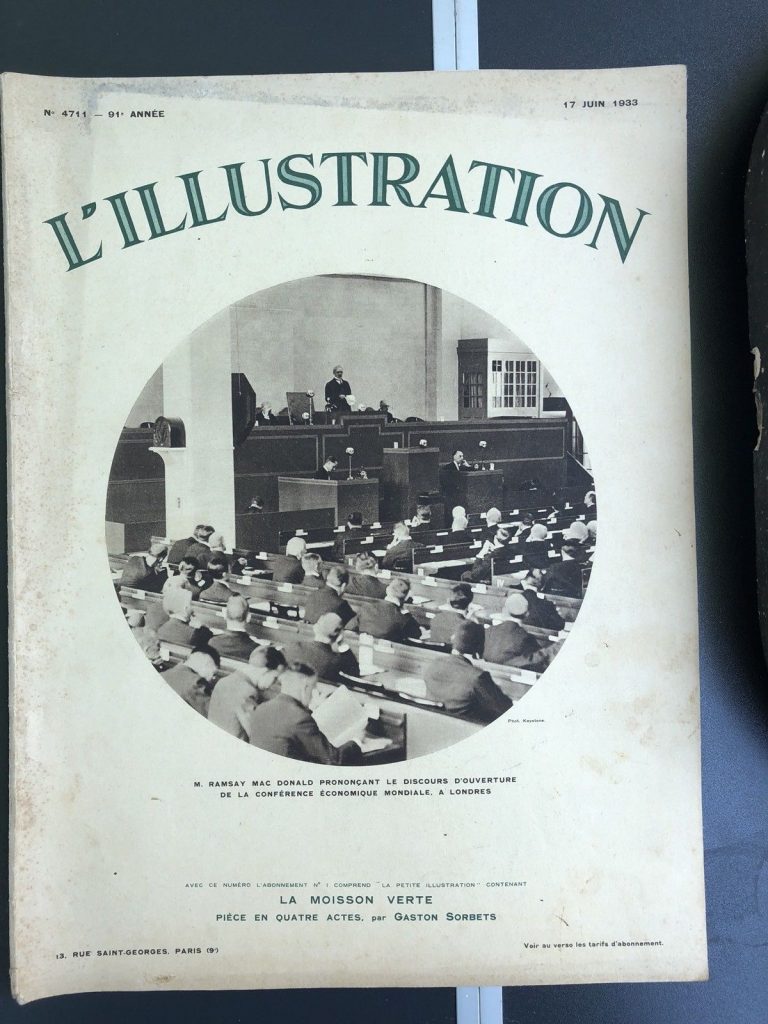 We wound our way along the Dordogne to the village of St. Cyprien. The Aire was 7 Euros a night and a short walk uphill to a bustling market and the restaurants. It was warm and we spent the afternoon under the trees in the shade. The strangest sound started at dusk. At first, we thought it was an electronic game, with a regular beeping sound. After a bit of a Google search, the culprits were identified as midwife toads.

Every so often particularly in hot weather, we find a caravan site. This enables us to go swimming, use the air conditioning and the washing machines. Franc remembered a site at Beynac with 2 superb pools. At one point we were the only users of the pool perhaps because it was a little on the chilly side.

France has yet another national holiday on Victory in Europe Day. This means that flea markets, brocantes and vide-greniers will be in full swing. Vezac, a few miles down the road, hosted a vide-grenier the following day. We bought a barrow wheel and some hessian grain sacks. The locals look at us with amazement at the things we regard as treasures. The term ‘Les Anglaises’ is often heard. The item with most legs was a pair of unbound books dated 1781 detailing the private life of Louis XV. The earliest copy I can find using Google is 1921!

We traveled to Rocamadour in the afternoon. This is well provided with Aires. We found one on the outskirts, which was patrolled by the local canine warden. He turned up anywhere there was food or other dogs. If things didn’t go his way he would prostrate himself under the van in the centre awaiting the next opportunity.

There is a lovely brocante cafe in Rocamadour. It is a bit pricey but the owner has some lovely things. She had a World War One leather map holder. I think we probably overpaid but I am sure that Paul Laidlaw would have bought it.

We left the Dordogne for Limousin. There was a vide-grenier at Crocq because it was Ascension Day, yet another national holiday. Crocq is a small rural town that made us rather sad. TripAdvisor gave a great report on a solitary restaurant but it was closed with a note on the door. We asked a local man whether there was somewhere else. He said it was a catastrophe with all the young people and businesses going to Clermont Ferrand. The only food available was the solitary supermarket. This at least was well provided with upmarket ready meals. We dined on Coquille St. Jacques, panna cotta and Limousin cheese.

The vide-grenier in and around the Chateau at Crocq was fabulous. Some of the furniture was far too big to take back but if you want traditional antique French then this is the place to search. They also had a superb 1936 Chevrolet but alas we have no towbar – yet!

We found a 1960s painting for 10 Euros, which needs further research. For paintings the questions I ask – “is it original, do I like it, would I hang it my house, is it signed and is it old?”

Fontainbleu palace provided our next overnight stop. There are no facilities but you can park directly at the back of the palace free of charge. We were 10 metres from the gates. As we were some of the first visitors, it was as if it was our palace – well just for a little while.

Some vide-greniers are not for us. Noeux-les-mines was such an example. Basically, streets of houses put tables out the front and these were loaded with modern goods. I just found some jewellery and glassware but nothing exciting.

We found a great brocante warehouse at Aire-sur-la-Lys near St Omer. We declined the antique dentist’s chair at 790 Euros but this was a fabulous item. It conjured up ghastly images of treadle-operated slowly rotating drills.

We did buy a job lot of cinema magazines from the 1920s thought, which were published by the Ministry of Strange Cases! (The translation may be a bit awry but I think I have the gist of it).