It is so long, too long since we were in France buying brocante – French for vintage goods. Moving house and major renovations have taken up our time. Brexit hung over us like a cloud but as it turned out the EU agreed an extension the day we departed. The Battlestar drove off  at 1.00am with a tunnel crossing at 4.45am .

Despite being deprived of sleep we located our first antique and brocante stop, ABCD Aire at Aire- sur -la –Lys near St.Omer. It is a vintage and antiques warehouse, which also specialises in up-cycled furniture.  The owner had all possible discounts accessed by barcodes. This was very efficient and something we must consider. The vintage pieces were expensive but the true antiques quite reasonable.We found a 19th century tapestry that was framed in Versailles and an Art Nouveau spirit cooker for crepes suzettes.

Old French magazines sell well in England and I found a few where there were only a handful of copies left in the National Library of France.

Our overnight stop was Avion, close to Lens. There was no fee and facilities were provided. A country park had been long established in an open cast mining area with great walks, climbing old slag heaps to tire you out .

Noyelle- sous-lens  was a delightful  mixture of the old and new. Un euro, deux euros or cinquante centimes were typical prices!

We um’d and aar’d about the practicality of an antique water pump at 20 Euros. It must have weighed 20 kilos with associated exorbitant shipping costs, but it was a must have purchase. 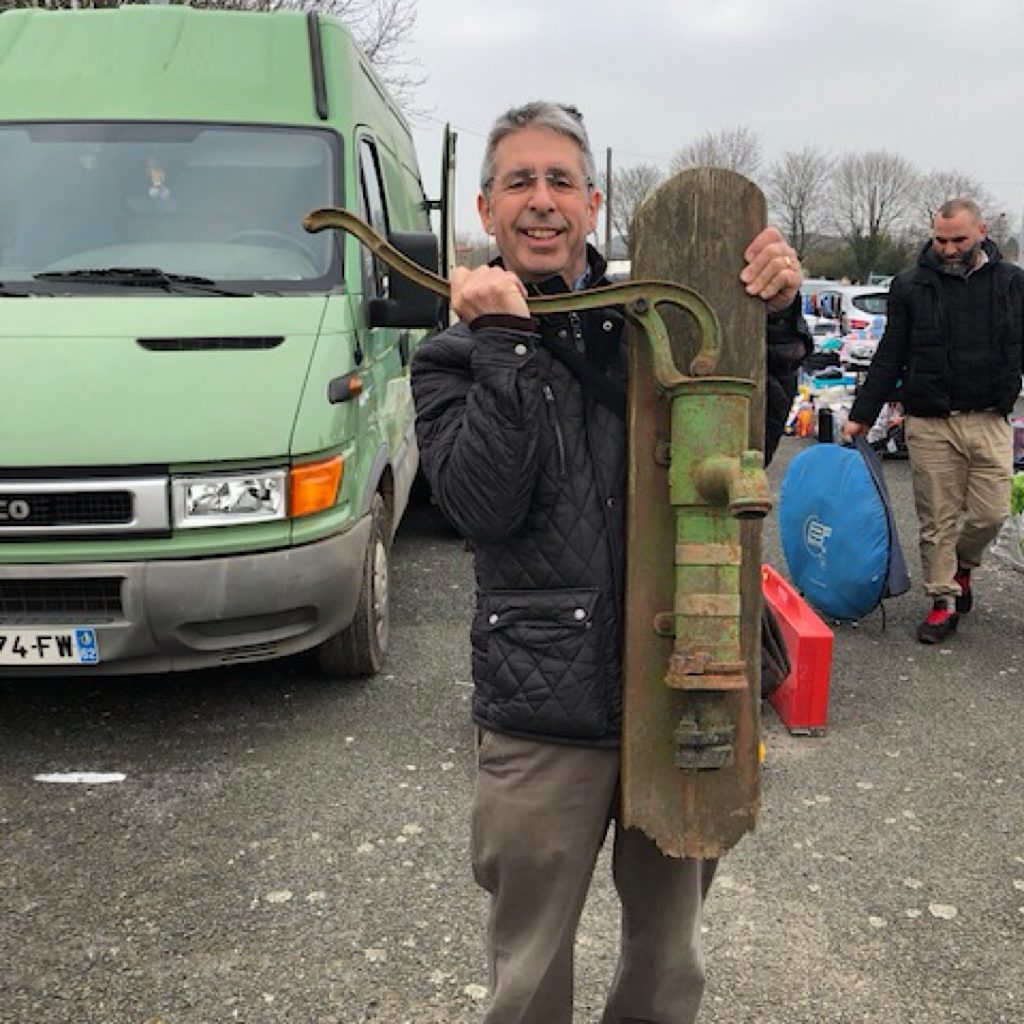 The satnav was playing up directing us on to motorways even when we had selected no tolls. Not only do you have to pay, but there are no opportunities for pickings!

We negogiated our way off the motorways and almost immediately Franc had to do a U turn as we discovered a clearance depot called Virginie Deco near Peronne. You have to sort through stuff but we found some great lamps for our friend Tim from Nostalgique  Vintage and Retro to rewire and test.

5 minutes later a charity warehouse was spotted by the river in Peronne. It was full of French kitchenalia common in France but sought after at home. We amassed quite a selection for 27 Euros.

Some friends had expressed concern about our going to France as there were riots. We did pass an anti Macron demonstration, there were more gendarmes than protesters!

Our free overnight stop was by the Oise river in Pont Ste Maxence and our chosen restaurant L’Art d’Oise. The restaurant was full and just one man responsible for service. In a magnificent show of speed and efficiency he kept all the tables satisfied and the tarte du citron was to die for.

We had researched 2 vide greniers on the Sunday in advance. The first was  Nogent-sur l’Oise in a sports centre. Finds were scarce, the offer was mostly modern paraphernalia, but we were successful with some French enamelware including a lavabo (French washstand) and a 1930s cocktail set.

The second vide grenier of the day was in Ste Maximin located in a retail park. Again this was a little disappointing with very little antique, brocante or vintage product. We did find some graniteware saucepans. This is a type of speckled enamel popular in the 1950s. I also found an early miniature edition of the Water Babies by Charles Kingsley.

Sometimes I behave like Drew Pritchard on Salvage Hunters -‘ I am going to have it anyway no matter what the price is’. Such was an amazing set of antique ceramic drawers for spices and dry foods in the Brocante de la Gare in Mouy. Franc looked on nervously as I negotiated this down to 100 Euros. Still after conversion and subtracting the discount for multiple purchases this was £75. 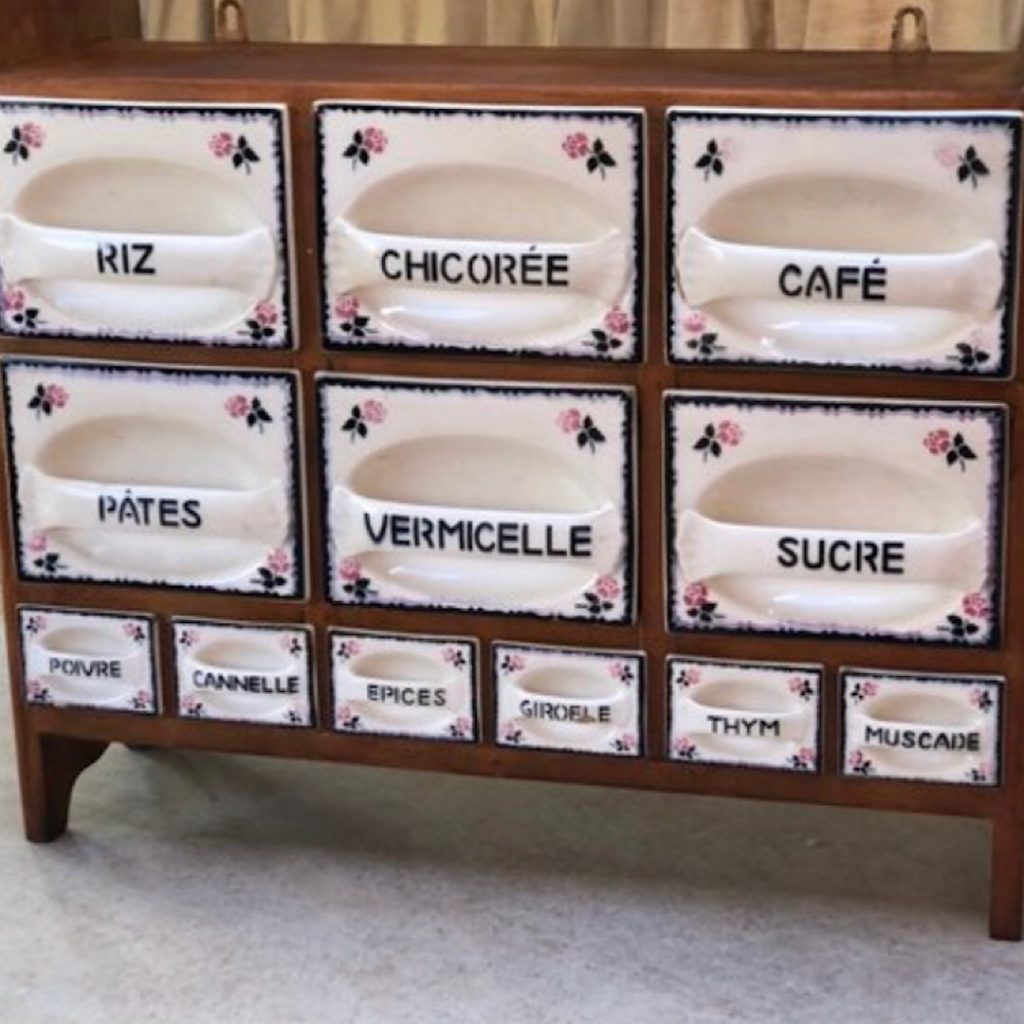 Eating and Time Out

Sometimes we become so absorbed in our tat buying we forget to plan for practical things like eating. Finding any food outlet on a Sunday in France is a big ask.  I thought it would be emergency rations, tinned curry and packet rice.

Luckily we found the town of Gisors, which boasts a fine abbey and a derelict chateau. The brasserie and a boulangerie were open at 3pm and assuaged our appetite.

The afternoon was spent watching  para-gliders  float above the scarp slope by the Seine. Our overnight stop was a struggle. Franc suffers from ‘motorhome parking spot envy’. He spied a motorhome by the Seine and after several miles driving and viewing of alternatives he decided to return to said spot and see if we could park up. Sadly it was in the grounds of a locked and fenced theme park. We had to return to Le Bas de Poses where there was a place by the river but the sound of the weir was apparently very inconvenient!

It was time for a tidy up! We had to removing the tat from the bed in order to sleep. The morning will be devoted to photography, measuring and listing. 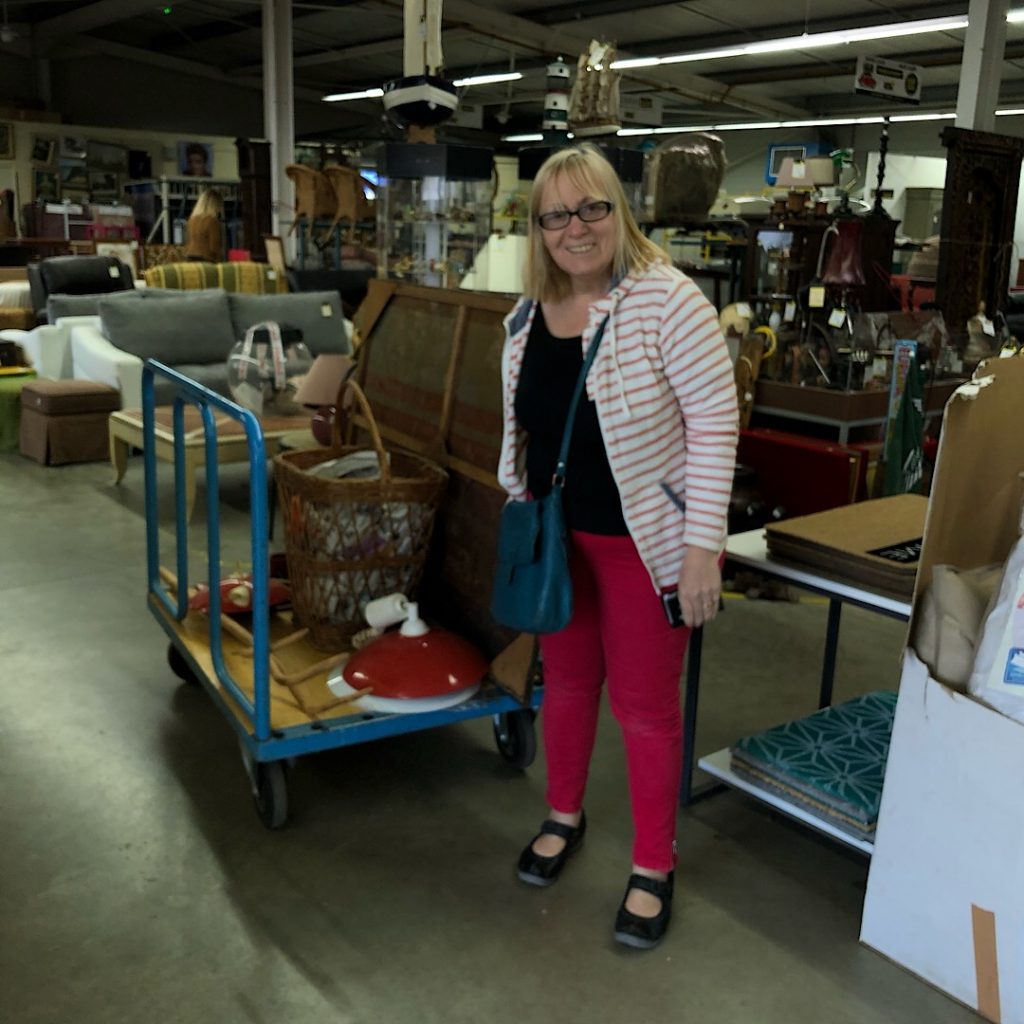 Evreux is twinned with Rugby our hometown and on the outskirts was a Troc at Guichainville. A Troc is a combination of a pawn shop, brocante and a second hand shop. There are usually an excess of modern goods but this one was the exception. One of our target purchases for the trip was vintage lamps and lampshades, the ones in France are always more stylish than at home.  The Troc supplied about 10 including some form the 1930s. Our friend Tim who does the rewiring and testing will be busy. We also acquired a huge French tapestry, which won’t fit anywhere in the Battlestar and have to be manoeuvred around for the rest of the trip. 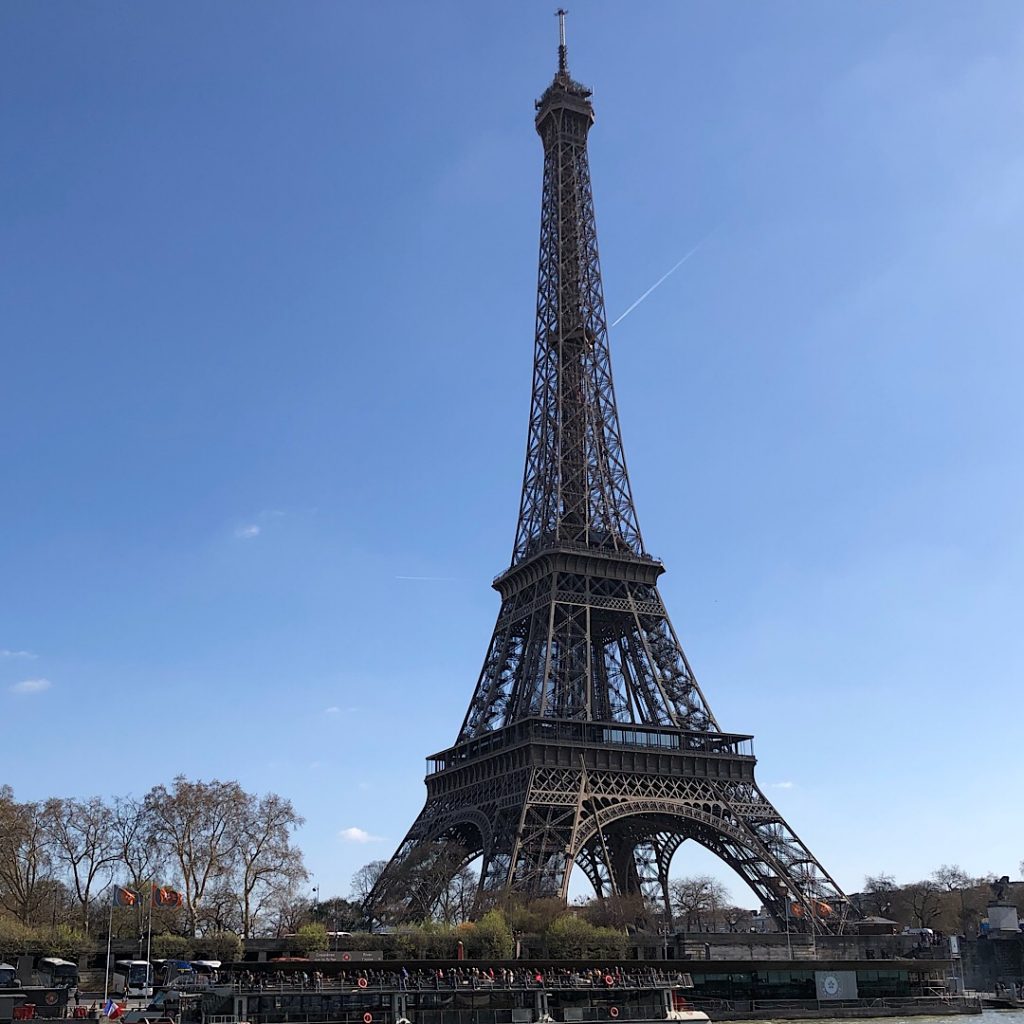 The height of our trip was to Paris culminating in an evening at the Moulin Rouge. Camping de Paris offers a motorhome stopover at 30 euros a night. It runs a shuttle bus to the nearest metro but we walked into the Trocadero in just over an hour through the Bois de Boulogne. Our feet were sore and we had an Uber taxi back for 28 euros.

The Jardin des Serres d’Auteui,l the botanic gardens are free of charge and a lovely way to spend a couple of hours if you like plants. There is no café or shop but we did find a loo.

Paris is not well provided for public toilets and you end up having to buy drinks or a meal and even then tokens are provided, it’s a bit of a pfaff.

If you come away from the main attractions a meal can be very reasonable and better in quality. We had formula meal including main course, wine desert and coffees for 42 Euros.